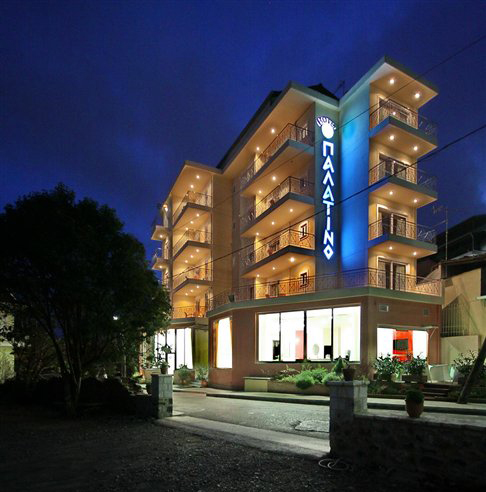 The hotel Palatino is owned by Technotour Hellas S.A. and it has opened in 2010 in Tripoli. Designed with special aim to ensure a cozy environment of highly functional and aesthetically perfect standards, it comprises a wide choice of rooms, apartments, as well as the unique Palatino Suite, for a stay beyond norms. It offers an excellent breakfast both in choice and quality, served in a special indoors breakfast room, or outdoors at the open veranda, private parking guarded 24 h, multiple special events hall, as well as many other amenities. The hotel’s novelty though is the existence of a small library- reading room of rare books and exclusive editions, which is open for the public (for the non-rare books), while the rare books and exclusive editions are only for the hotel’s visitors.

HISTORY OF NAME
Sixty years before the Trojan war, after a conflict between the ancient Arcadians of Pallantion, the party that lost migrated to Italy to settle and create a new colony. They arrived at Kraiata, at the gulf of Gaeta, then they sailed to the banks of Tiber River and anchored at its left bank, near a hill. There they heard a language being spoken, similar to theirs. Truly enough, Aborgines had settled in the area, a tribe descending from Oinotros son of Lycaon, who had migrated to Italy from the Peloponnese many years before that. Favnos was the king in that area and he very kindly accepted the Arcadian newcomers, giving them a place to get settled. They selected one near the aforementioned hill and built a town which they named Pallantion, as was the name of their metropolis. The Romans changed slightly this name to Palatio, thus calling the hill Palatino Hill. After the founding of Rome, the Romans honored the Arcadians and their metropolis, recognizing their role of inhabiting the area. As Pausanias mentions, the Roman emperor Antonius the Elder called Pallantio a city and not town as it really was, granting its inhabitants freedom and exemption of taxation.